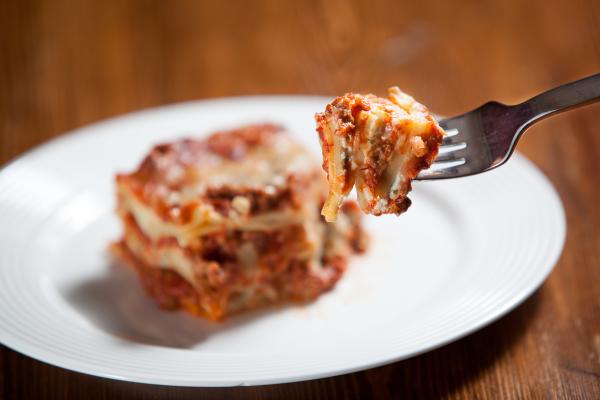 How 4 Pans of Lasagna Fed 100 People at My Church

Yesterday I ate the last piece of the miracle lasagna. Let me explain.

For a friend’s funeral dinner, I had been told other people were bringing lasagna and additional items and I was to bring only cookies. Of course I double-checked with my husband, Pastor Nicholas Osborn, and he confirmed — only cookies.

When we arrived at the church, I found three other women in the kitchen: Jean Shaver, Valena Stulzman and Lois Roggow. Lois had made three 9x13 pans of lasagna, plus one 9x9 pan. There were plenty of desserts and some bread, but that was it. It didn’t take long to realize there had been a miscommunication.

Quickly two women left to buy juice and salad. The two of us staying behind started buttering bread to brown in the oven. Then I slipped out to do a headcount of guests — 80, 90, 100, and I quit counting. We clearly did not have enough lasagna, even if only half of them stayed to eat.

When the other two women returned I told them we needed a miracle like the multiplying of the loaves and fishes. We formed a prayer huddle and pleaded with the Lord to do just that for the lasagna.

When the service ended, people started filing into the dining area. Before long all 87 chairs set around the tables were filled. The blessing was said and we started serving. The portions on the plates going by looked huge, so I whispered that the servers needed to make smaller portions. They complied — and yet the plates still seemed heaped with lasagna.

When we were at the end of the last pan we looked from the hungry people standing in line to the empty pans, and one woman said she was going to make a last check in the kitchen. To our amazement she came back with a full 9x13 pan of lasagna!

I pointed out that we still had about 35 people left to feed, not counting those of us who’d decided not to eat at all. Once again the four of us sent up prayers for the Lord to please multiply the lasagna.

From that last pan, plate after plate went by with huge portions of lasagna. Then all of a sudden everyone was seated and eating. I peeked at the pan and was amazed to see a full third still left. How on earth? Oh, me of little faith! I was in shock over what I had just witnessed — a bona fide miracle!

When everyone had eaten their fill, one of the women asked if I wanted to take the leftover lasagna home. Leftover lasagna? Of course I said yes.

Later, a group of us circled once again in the kitchen, joined hands, said a prayer of thanks and sang, “Praise God from whom all blessings flow!” We were all beaming. And I have to admit, I was a little choked up.

So that brings me to yesterday. I was in a hurry, ran into the house and realized I was so hungry I felt faint. I opened the fridge and what was sitting right in front? The miracle lasagna — touched by the hands of God Himself and multiplied so much that we had leftovers to bring home.

Christina (Potter) Osborn is the wife of Pastor Nicholas Osborn, and they serve the Hurley, Mitchell, Platte, and Yankton churches in South Dakota, the largest district in the Dakota Conference.

Download the prayer blog and prayer requests by clicking here!

BRIEF FACTS ABOUT THE NAD: The North American Division (NAD) includes the countries of Bermuda, Canada, Guam and Micronesia, and the United States. The NAD is home to more than 1.2 million Seventh-day Adventists who represent every major cultural and ethnic group in the world, worshiping in some 6,000 congregations.

Even though the North American Division was the birthplace of the Seventh-day Adventist Church, it wasn’t fully recognized as a world division until 1985. For more than 150 years it has promoted the mission of the church around the world, as it has spread the Advent Message to more than 200 countries.

PRAYER REQUEST: Please pray for wisdom for Division leaders, Dan Jackson, president; Alexander Bryant, secretary; and Thomas Evans, treasurer. Please pray also for Union, Conference, and local church leaders in the NAD, that the gospel will be spread rapidly throughout this territory.

PRAYER REQUEST: Please pray that many will come to know Christ through the 60 hospitals, 1,200 schools and 15 universities and colleges located in the NAD.

PRAYER REQUEST: Recently USA Today recognized the Seventh-day Adventist Church in North America as the most ethnically diverse religious denomination in the United States. Pray that even in our diversity there will be unity throughout the NAD Division and congregations.

PRAYER REQUEST: Pray for our church members in Guam and Micronesia, that God will give them peace, strength and safety, and hold back the winds of strife. (For complete statement from the NAD, click here!)

PRAYER REQUEST: Remember the youth in the North American Division. Pray that they will seek first the Kingdom of God and His righteousness. Pray that they won’t be influenced by secularism around them, but that they will become bright shining lights to their peers, actively proclaiming the soon coming of Christ.

PRAYER REQUEST: Pray that every member of the NAD will be mobilized to participate in the final thrust of God’s great evangelistic enterprise on planet earth. Pray that there will be Total Member Involvement in North America, for youth, as well as adults.