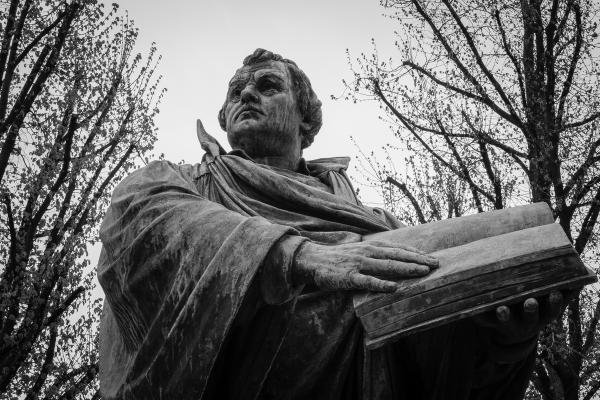 Lessons on Prayer from Martin Luther

Martin Luther is probably one of the most well known Christian reformers from the last 500 years. He is recognized as the leader of what is known as the Protestant Reformation in the 1500’s. Strengthened by his study of the Word and many hours spent in prayer, he counteracted the errors and false teachings of papal Rome, which held multitudes of believers in darkness for centuries. Standing only upon the pure truths of God’s Word, and empowered through the blessing of the Holy Spirit, he made an impact that stirred the entire world of Christianity. Its effects can still be felt today. He chose to stand against what seemed impossible odds, and the papal leaders wanted to send him to the stake (just as they had many others before him). He remained steadfast, however, unmoved by the powers of darkness set to destroy him.

Eventually others, seeing his unflinching courage and convicted by the biblical truths he taught, took their stand alongside him. What was his secret? How could he stand so courageously against the most influential and powerful religious system in the world and yet not be ruffled? The answer was prayer. His strength came from the secret place of prayer.

Consider the following testimony of Martin Luther and his firm belief in the power of prayer, not the power of force, to work out their victory.

“When powerful foes were uniting to overthrow the reformed faith, and thousands of swords seemed about to be unsheathed against it, Luther wrote: ‘Satan is putting forth his fury; ungodly pontiffs are conspiring; and we are threatened with war. Exhort the people to contend valiantly before the throne of the Lord, by faith and prayer, so that our enemies, vanquished by the Spirit of God, may be constrained to peace. Our chief want, our chief labor, is prayer; let the people know that they are now exposed to the edge of the sword and to the rage of Satan, and let them pray…We shall do more by our prayers than all our enemies by their boastings’” (The Great Controversy, p. 209).

Although human circumstances looked bleak and foreboding, Martin Luther knew he served a God that is not limited or controlled by the plans of evil men, and God rewarded his faith. From the secret place of prayer came the power that literally shook the world in the Great Reformation.

Of Martin Luther is written that during the times of greatest struggle, “He did not pass a day without devoting three hours at least to prayer, and they were hours selected from those the most favorable to study. In the privacy of his chamber he was heard to pour out his soul before God in words ‘full of adoration, fear, and hope, as when one speaks to a friend.’ ‘I know that Thou art our Father and our God,’ he said, ‘and that Thou wilt scatter the persecutors of Thy children; for Thou art Thyself endangered with us. All this matter is Thine, and it is only by Thy constraint that we have put our hands to it. Defend us, then, O Father!’” (The Great Controversy, p. 210)

And what was God’s answer to this great crisis in the 1500’s? Inspiration tells us, “God did listen to the cries of His servants. He gave to princes and ministers’ grace and courage to maintain the truth against the rulers of the darkness of this world… The Protestant Reformers had built on Christ, and the gates of hell could not prevail against them” (The Great Controversy, p. 210).

Melody Mason is coordinator of United in Prayer for the General Conference. This prayer devotional is an excerpt from Chapter 5 of her book “Daring to Ask for More: Divine Keys to Answered Prayer.”

• PRAYER REQUEST: Please pray for the “Reformation Seminars” that are being held in multiple locations around the world as we near the 500th anniversary of the Protestant Reformation. Pray that many are brought to a clear understanding of biblical truth and recognize the significance of current events.

• PRAYER REQUEST: Please pray for God’s people not to be influenced and led astray by the pressures of modern day culture and spirituality. Pray that we will stand firm for truth, just as Martin Luther in his day. Pray that we will have courage to pray bold prayers for the advancement of the gospel.

• PRAYER REQUEST: Please pray especially for Japan and the Total Member Involvement events planned for this country in 2018. Pray for God to draw young adults into the church as there are very few members under the age of 50. Pray that young adults will accept the truth and become active members.

• PRAYER REQUEST: The president of Eastern Japan Conference, Nozoma Obara, asks for your prayers, especially for the city of Akita (which has the highest rate of suicide). Obara is boldly stepping out in faith, asking his members to join him in prayer walking through the Eastern Japan conference. Let’s join our prayers with theirs. God can work miracles.

• PRAYER REQUEST: Please pray for the Middle East and North Africa Union (MENA) and for the difficult work in this region. Pray for effective language acquisition. This is extremely difficult for traveling staff of the Union office and leaders in each of the 20 countries. Pray for the gift of tongues to enable more personal work!

• PRAYER REQUEST: Please pray for those coordinating details and logistics for the 2020 General Conference session in Indianapolis, Indiana. Pray that they will seek God’s will in all that they do, and that God will be glorified as they interact with staff and secular business professionals in the city.