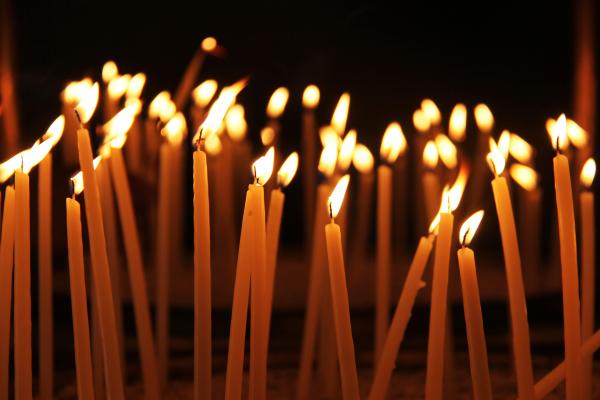 No Peace in Meditation

A spiritual guide led Gustavo Javier Caballero into a darkened room to communicate with dead people. “They will give some answers that you need,” the guide said.

Gustavo wanted answers. He struggled to sleep at night and was meditating twice a day — an hour in the morning and an hour in the evening — to cope with stress. The activities offered peace for a while, but soon the stress returned a hundredfold.

The encounter with the supposedly dead people shocked Gustavo. He heard distorted voices, yelling, in the room. He saw people walking around and disappearing. He thought they were demons. Seeing his fright, the spiritual guide said, “Don’t worry. They won’t hurt you. They will only examine your mind and your feelings.”

After that disturbing experience, Gustavo reminisced about his life. His parents, who belonged to another Christian denomination, enrolled him in a Seventh-day Adventist school at the age of 12 at the recommendation of a neighbor. He wasn’t interested in the school’s Bible classes. A year before he graduated from the Adventist high school, neighborhood friends introduced him to alcohol and drugs.

Marijuana, alcohol, and cocaine took away Gustavo’s worries every weekend. But the stress returned, and he began suffering constant headaches and nausea. He went to a psychologist for help, and she recommended Eastern meditation.

Gustavo found a spiritual guide at an Eastern temple who taught meditation and yoga. To meditate, he repeated a phrase from a dead Indian language again and again. This was supposed to relax him and connect him to a peaceful place where his mind went blank.

Life seemed to improve, but then he heard voices and saw apparitions during the meditation-induced trances. “I was going crazy,” Gustavo said. “I needed someone to help me.”

It was then that Gustavo remembered studying the Bible at the Adventist school. He contacted an Adventist pastor and an Adventist mental health worker for help. They prayed with him and advised him to give up meditating, yoga, and drugs. Gustavo started attending church every Sabbath.

Meditation and yoga proved easy to stop, but the weekend drug use was more difficult.

As Gustavo struggled, he prayed and found help in the Bible. On sleepless nights, he claimed Isaiah 26:3, which says, “You will keep him in perfect peace, whose mind is stayed on You, because he trusts in You” (NKJV). He also read Philippians 4:13, which promises, “I can do all things through Christ who strengthens me.”

The temptation to use drugs persisted after he quit. Old friends urged him to join them, but he resisted by claiming Jeremiah 20:11, which says, “But the Lord is with me as a mighty, awesome One. Therefore my persecutors will stumble, and will not prevail. They will be greatly ashamed, for they will not prosper. Their everlasting confusion will never be forgotten.”

Gustavo gave his heart to Jesus and was baptized at the age of 34.

“I was looking for a cure, for someone to help me feel better,” he said. “In church, I found out that I’m God’s son. I was freed by His life.”

However, after baptism, he found a video presentation about “Christian meditation” and decided to try it. The technique, he said, mirrored Eastern meditation but, instead of repeating the phrase in the dead Indian language, he repeated words from the Bible.

The results shocked him. “I lost control of my mind, and it went blank like before,” he said. “I felt an energy surging through my body, and I heard voices telling me what to do.” One voice said, “Tell other people to meditate.” Another voice said, “Give money to the temple.” A third voice said, “Meditate in the name of Ricardo to help Ricardo receive energy.” He didn’t know anyone named Ricardo. Gustavo was frozen, unable to move, until he came out of the trance.

Gustavo resolved never to meditate that way again. Instead, he said, he chooses to “read the Bible and meditate on God’s word, not doing Eastern-style meditation. That is a dangerous place. God is not guiding that kind of meditation.”

He also is convinced that yoga is a tool of the devil. “With yoga, you feel good, and you don’t need to read the Bible or have Jesus in your life,” he said. “You think that spirits are working within you and that is enough. How dangerous this is!”

Today, Gustavo is 40 and works as a literature evangelist and massage therapist in Paraguay’s capital city, Asunción. He also is an active participant of a community outreach center attached to Nueva Sajonia Seventh-day Adventist Church, a 2016 Thirteenth Sabbath project.

He tells people in the neighborhood that drugs and meditation aren’t the answer.

“Getting high and meditating feels good for a while, but then you feel worse,” he said. “The only solution is Christ. Only when you pray do you feel better — and have real peace.”

Andrew McChesney is the editor of Adventist Mission. This story is reprinted with permission.

• PRAYER REQUEST: Pray especially for those who may be caught in the web of Eastern forms of prayer and meditation or spiritualism. Pray that God will open eyes and hearts to the dangers of this avenue of meditation as He did Gustavo.

• PRAYER REQUEST: Pray for the community outreach center, referenced in the story above, in Paraguay’s capital, Asunción. Pray for Gustavo’s witness for Christ as he continues to share that Jesus is the only way.

• PRAYER REQUEST: Pray that God will especially bless the ministry of a Life Hope Center in Asuncion, Paraguay, inside a prison where hope is so greatly needed! Pray that God will provide funds to allow them to provide for the basic needs of some inmates.

• PRAYER REQUEST: Pray for the Life Hope Center in Dublin, Ireland. At the Cuisle Center in Dublin, immigrants are reaching out to the local population through health and wellness classes and other services. Ask God to help them forge connections and reach as many as possible.

• PRAYER REQUEST: Pray for Lifestyle centers that have been started in at least half a dozen Indonesian cities. Please ask God to bless and multiply this ministry.

• PRAYER REQUEST: Again, pray that God would show us how to create “Life Hope Centers” or “Centers of Influence” in our own churches and communities. Pray that as we do this, the world will see John 13:35 fulfilled in our lives as Seventh-day Adventist Christians: “By this shall all men know that ye are my disciples, if ye have love one to another.”

• PRAYER REQUEST: Please continue to pray for all those who have lost loved ones and homes in the recent tragic fires around Paradise, California. Nearly 1,300 Adventist church members have been affected with many losing everything. In fact, as of this past week, more than 630 people are still considered missing from the Camp Fire, some of these are church members.